With the lure of bonus points and the expected great weather it was off to Mt McLeod (vk3/ve-034) and Ulrich Peak (vk3/ve-038).

Mt McLeod is a relatively easy walk although the season road closure does adds 7Km to the round trip. I had an unexpected visit from the Park Rangers whilst on the summit (they had driven most of the way only walking the last 1km) Glad I had paid for the camp site a Del’s Plain 🙂

There visit did give me the chance to make comment on the hard to find track up to Andersons Peak which formed part of my intended route to Ulrich Peak.

Ice Crystals rising out of the ground

After a sub zero night camped at Del’s Plain it was off to Ulrich Peak. I had read in detail the two posts on accessing Ulrich Peak by Ben vk3ftrv (now?) and Wayne vk3wam. Armed with that information and a copy of Geoff Lawford’s 1993 1:30K map of the Mount Buffalo Plateau I had worked out my plan.
Geoff’s map showed a different alignment for the walking track which had it heading towards Ulrich for about 500m before heading back to Anderson Peak.

From the Anderson Peak sign on the Mt McLeod jeep track I headed up the short distance to the ridge line from here it was a case of head upwards, and keep an eye on the compass. On the way up I found a rock cairn on a clear rock face (possibly the one Wayne found), this gave me some confidence I was on the intended path, in the end I reached the ridge between Anderson and Ulrich in the saddle to Ulrich’s east them and made my way WNW (ish) until inside the AZ. 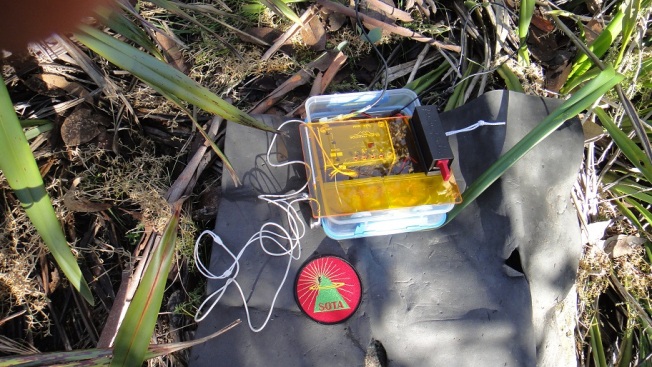 The MTR at Ulrich

So over two short days of the winter solstice, two 10 point summits with bonus points.